The U.S. economy gained a whopping 4.8 million jobs in the month of June, bringing the unemployment rate to 11.1 percent and roundly beating economist expectations.

The June data, released Thursday by the Bureau of Labor Statistics — one day early, in deference to the July Fourth holiday — reflects a labor market that is slowly healing from the devastating effects of the coronavirus pandemic.

Economists had expected an increase of 3 million new jobs and an unemployment rate of 12.3 percent — though a large element of uncertainty prevailed, after May’s surprise gain of 2.5 million jobs, when economists had predicted a loss of as much as 8 million positions.

President Donald Trump touted the job numbers as representing the “largest jobs gain in the history of our country,” during a news briefing on Thursday morning. “Today’s announcement proves that our economy is roaring back. It’s coming back extremely strong.”

Trump specifically praised the 356,000 gains in manufacturing, which, he said, were “because of our great trade policy.”

Although the number of total jobs added is huge by any historical measure, the economy is still a long way from back to normal, said Dan North, senior economist at Euler Hermes North America. “It still is only chipping away at the 22 million or so jobs we lost,” he said. 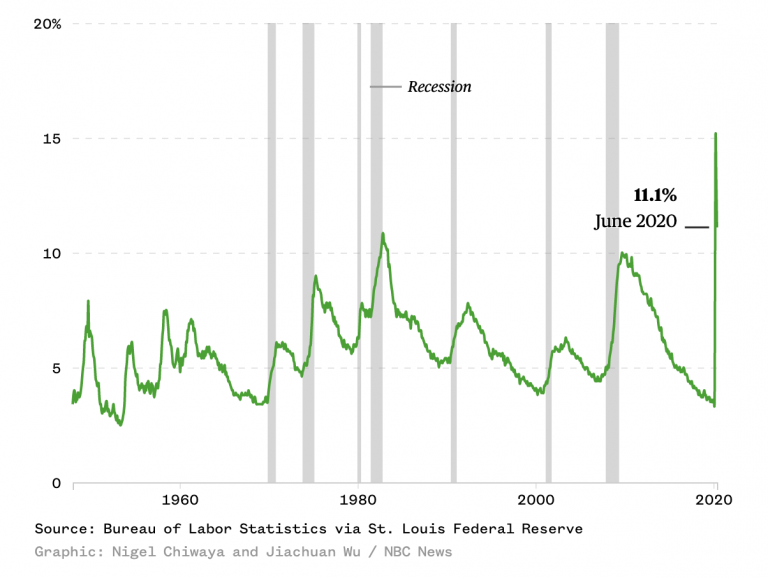 “We’ve seen that curve going down but we’re still at previously astronomical levels,” North said. “The long-term average before this crisis was around 350,000, so we’re at four times the long-term average and more importantly, it’s flattening out,” he said.

The timing of the Independence Day holiday created an unusual situation in that both the monthly BLS data and the weekly unemployment insurance filings tracked by the states were released at the same time.

While both track the health of the labor market, broadly speaking, they are not analogous.

The biggest difference between the two data sets is what exactly is being counted: The BLS figures are themselves a combination of two sources: The household survey, for which the government asks a representative sample of the U.S. population demographic and employment-related questions, and the establishment survey, which provides an industry-by-industry breakdown of employment, hours and earnings.

Both metrics have their strengths and weaknesses, labor economists say.

The monthly report also has much more detail for analysts to pore over: labor force participation rate, employment-population ratio, wage growth and disparities between demographic groups. “Those are critical numbers as well,” North said.

In the current pandemic crisis, the big advantage the weekly data confers is its immediacy. “It’s more real-time and it helps us understand how quickly the crisis is evolving week to week,” said Daniel Zhao, senior economist at Glassdoor. Data for the monthly jobs report is gathered in the middle of the month, which means it inevitably misses some of the most recent developments of a fast-moving viral pandemic.

Both data sets have quirks that make them susceptible to errors. A much-discussed classification error in the BLS data counted some workers who had been furloughed as being at work but not present — as if they were taking a vacation — as opposed to having experienced job loss. “If you’re thinking about the current situation, those lines start to sound really blurry,” said Adam Blandin, an economics professor at Virginia Commonwealth University. “It’s not so clear whether you have a job and you’re just absent, or unemployed and hoping to become reemployed soon.”

And the weekly figures can vary because some states only report filings at two-week intervals.

This is why, generally, economists tend to prefer looking at three-month moving averages to get a feel for labor market trends. The current crisis, though, has made those averages nearly meaningless — eliminating much of the visibility into the future direction of the labor market.

“That makes it harder to predict where we’re heading, if we’re going to see the recovery continue or we see a reversal in the labor market,” said Alexander Bick, a professor of economics at Arizona State University.